Bildrechte: NLWKN
Adjustable weir in project area. Water level can be adjusted within a difference of 1.5m

For the successful rewetting of the lowlands it was necessary to build controllable weirs into the drainage ditches and to implement further supporting measures. These measures were realised during a period of several years. 25 adjustable weirs and 12 small dams were built. After the project has been finished, a total area of 1,200 hectares is rewetted now by 43.5 km of dammed ditches.

These measures aim to develop a large area of wet grassland as a suitable habitat for meadow birds, whilst ensuring a sustainable usage of the grasslands in a way that supports nature conservation., but to reestablish water levels, that were typical for the area before dikes were built on the river Hunte and Lake Dümmer in 1953.

The proposed water levels are shown in the following figure. Flooding in winter and slow step-by-step drainage during early and late spring recreate suitable habitats for numerous species of meadow birds, which were threatened with extinction. At the same time the meadows can be used by the local farmers during the summer and in this way the formerly intensively farmed land can continue to be used for grazing.

Bildrechte: Oliver Lange
Small dam in project area (next to the ditch are recently built fences)

After end of the grazing season around November and beginning of December the adjustable weirs are closed to reach water levels of about 10 cm above ground. Depending on the amount of rain the water level rises in the ditches and the surrounding area gets slightly flooded.

The dimension of flooding can vary in the different polders. In springtime the weirs are opened again step by step to make sure, that the pastures are dry enough in summer for grazing

The date for drawing down the water level is individually regulated on the different polders. On grazing areas for instance water level is drawn down from March at the latest, to make sure, that the cattle doesn’t harm the pasture grounds. In very wet grassland areas, which are preferably cut, drawdown of water level can be delayed until end of May. Different polders and varying water levels offer a great habitat diversity in the project area.

After the project has been finished, rewetting of some additional areas will be continued, provided that private land owners do agree in suitable contracts. 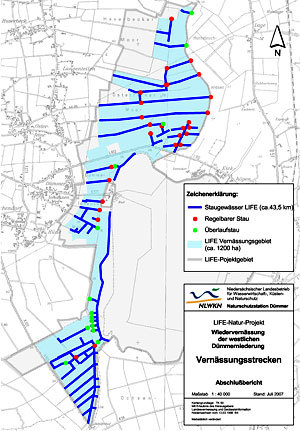 Bildrechte: NLWKN
The rewetted areas, weirs and ditches in the project area
Drucken