Between 2002 and 2007, EUR 3,1 million were spent on nature conservation measures within the framework of the LIFE Nature project "Wiedervernässung der Westlichen Dümmerniederung" (Restoration of Wetlands in the Western Lowland Area of the Dümmer Lake).

Approximately 175 hectares of formerly agricultural land were bought. This meant that a total area of 2,500 ha of fen was now successfully consolidated in the European bird sanctuary of Lake Dümmer, and conditions were created for large-scale rewetting.

These measures aim to develop one of the largest areas of wet grassland in Northwest Germany as a suitable habitat for meadow birds.

LIFE Nature is the European Union's funding instrument for the protection and development of areas under the Natura 2000 network scheme. From a clearly defined framework of projects the Commission chooses which ones to fund. A project could typically run for up to 4 years, with up to 50% of the total cost covered through EU funding. LIFE projects are designed specifically for the protection of the species and habitats that determine the conservation value of the respective area. 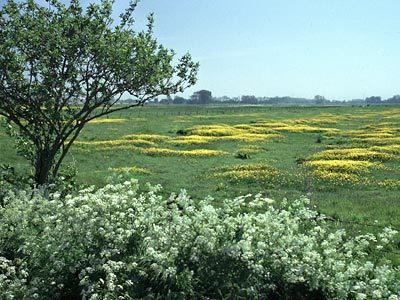 The "Restoration of Wetlands in the Western Lowland Area of the Dümmer Lake" project was specifically designed for the protection and improvement of breeding and resting habitats in the "Dümmer" European bird sanctuary. The project's aim was to stabilise the stock of a number of species, among them priority species, such as the corncrake and the bittern. The protection of wading birds received special attention.

The main project goals have been

• Rewetting of the fen

• Rewetting of the main bog area through damming of the ditches in a 1,200 hectare area while guaranteeing long-term grassland farming 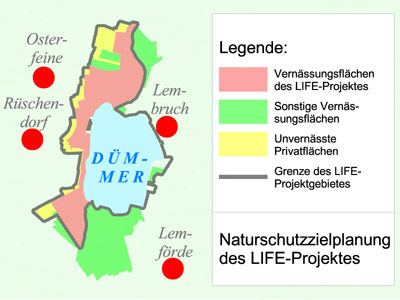 After the project could be completed successfully, the largest rewetting area of fens in Northwest Germany was created in the lowland area of the Dümmer lake, with a total of over 2,500 hectares. This means that one of the most important Central European habitats for a number of target species in the EU "Birds" Directive could be protected, developed and restored to its original state.

A similar project, the LIFE Nature project "Ochsenmoor", was completed with great success in 2000.

The project had been carried out by the Lower Saxony Water Management, Coastal Defence and Nature Conservation Agency (NLWKN) via the nature conservation base Dümmer and executed in close cooperation with nature conservation, water resource and agricultural structure interest groups.

After the project could be finished, management of the rewetting areas will continuously be guaranteed by the nature conservation base Dümmer.