By blocking access to 6.5km of pathways in the southern part of the project area a 300 hectare "quiet zone" was successfully created in 2003.

In 2006 more pathways with a total length of 14.2km were blocked in the central and northern parts of the project area.

However access to most of those sections is only limited when necessary, specially in winter during the migratory season. Only if sensitive bird species flock in great numbers gates of certain catchment areas will be locked periodically.

Outside migratory seasons visitors might use these pathways though. It’s not intended to lock out visitors from the wetlands. Visitors shall rather be guided to experience the beauty of nature without causing disturbance.

To realise this as good as possible two nature trails were created at the lake as well as a hide for bird watching in the bog near Osterfeine. The hide however was financed by another project. 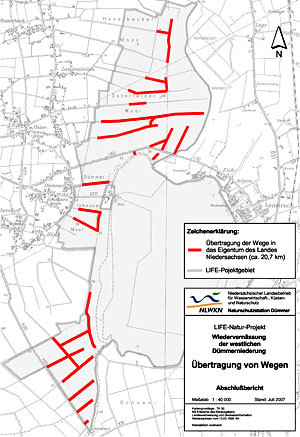