Removal of Small Trees and Shrubs

Until the end of 2003 the heath and lean turf areas in the LIFE project area were kept open by the German Army for military training purposes. This was achieved partly by the regular training operations and partly by mowing heath areas and removing small trees and shrubs (mechanical elimination of upcoming woody plants).

In addition to grazing by large herbivores the open areas will be maintained for the foreseeable future by removing small trees and shrubs. However, there is no immediate need for action in the fenced areas. Here it will be seen what success can be achieved through the grazing animals that browse the woody plants. Thus, only absolutely necessary activities can be performed in a cost-efficient manner (e.g. removal of older black cherry seed trees). 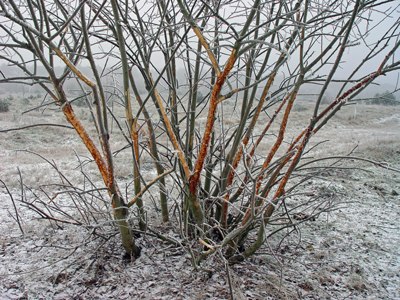 Bildrechte: NLWKN
Willow shrubs are browsed particularly intensively by the grazing animals. The bark of the willow contains salicin. It is metabolised to salicylic acid, which has an analgesic, anti-inflammatory and antipyretic effect.

Outside of the permanently fenced areas the situation is different. Here the growth of endemic deciduous woods (e.g. common oak) is desired on a smaller scale. Thus the development of the unique Krattwald forests is supported. 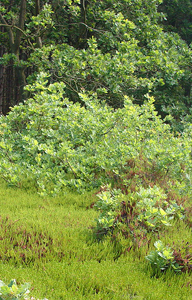 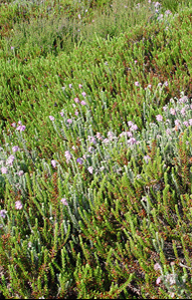 Other parts consist of dense populations of mainly crowberry, which proved to be stable with respect to the vegetation development over a number of years. Due to unfavourable germination conditions the woody plants have difficulty gaining a foothold in these areas of dense growth.

Especially in areas close to forests, dense populations of black cherry trees and other woody plant species have formed, which overgrow valuable heath habitats. From autumn 2007 onwards the focus of the LIFE Nature project will be on the removal of small trees and shrubs.