In 2006 three large paddocks were created in the central area of the former military training grounds, where today Heck cattle and koniks are kept. The goal of having these large herbivores graze here is to maintain the extremely valuable heaths and lean turf and to stop their advancing ruderalisation and shrub growth.

Heck cattle are a relatively young cattle breed. They were given their name by the brothers Heinz and Lutz Heck, who were zoo directors in Berlin and Munich in the 1920s and 1930s. During that time they began crossbreeding different cattle to create a breed that closely matched the characteristics of the globally extinct aurochs. This is also referred to as "breeding back". Heck cattle are well suited to being outside all year round and are ideal for use in landscape management. Koniks are a primitive breed of horse that originated in Eastern Europe (mainly Poland) and is closely related to the also extinct Tarpan horse (European wild horse). The name "konik" comes from the Polish language and means "pony, small horse". These horses are also very robust and ideally suited for being kept outside all year round. 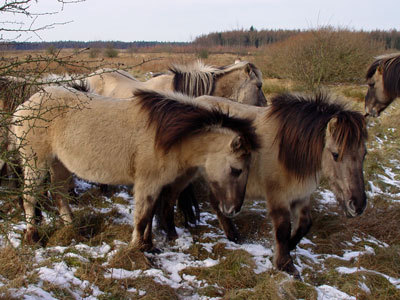 In 2006 a Gallagher fence nearly 13km long with four wires was erected (1.30m high with oak fence posts instead of metal poles). The power supply for both southern paddocks comes from a power supply from the Hinrich Wilhelm Kopf barracks in Altenwalde, for the northern paddock a solar system is used. Since there is no suitable water for a permanent water supply in the paddocks, wells were drilled in each paddock. The solar-powered pumps feed one frost-proof drinker for frost periods in winter, and a large drinking trough for frost free periods. 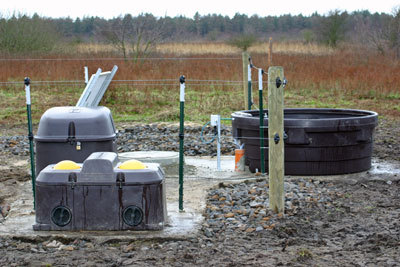 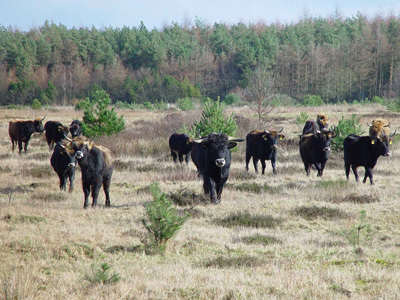 Bildrechte: NLWKN
Heck cattle in the southern paddock I
During the time from mid-November 2006 until the end of January 2007 a total of 25 Heck cattle and 10 koniks were brought into the LIFE project area. Heck cattle and koniks are kept together and thus consistent grazing of the heaths and lean turf areas is achieved. The browsing successes are impressive. 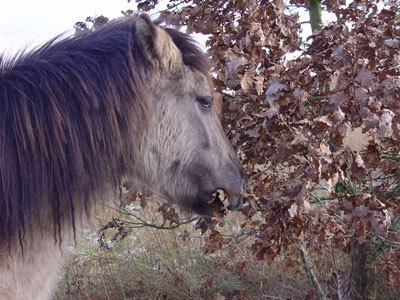