The LIFE project area is located in the north of the so-called "Hohen Lieth", a glacial drift reaching from Cuxhaven-Duhnen south to Bremerhaven. Several moraines rich in pebbles and sand are now sitting on top of this glacial drift. Included in this is the "Höltjer Höhe", which at 30m above sea level is the highest point in the area. The relief of the area is slightly wavy and shows just a few prominent small elevations, which are mostly burial mounds and therefore have an anthropogenic origin. Examples are the Große and Kleine Helmersberg in the south or the Krahnstein in the north of the area. 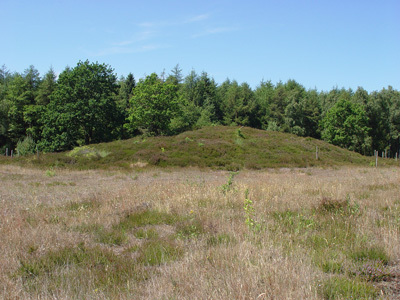 Bildrechte: NLWKN
The Große Helmersberg is one of the more striking burial mounds in the area.

The predominantly dry and sandy soils have developed into podzols of various characteristics during the several centuries of heath usage. Pure podzols can only be seen in a few places and cover a relatively small area, reaching from the west and east into the project area. Over 80% of the area is covered by brown podzolic soil, which as a rule provides a slightly better nutrient supply than the very oligotrophic pure podzols. 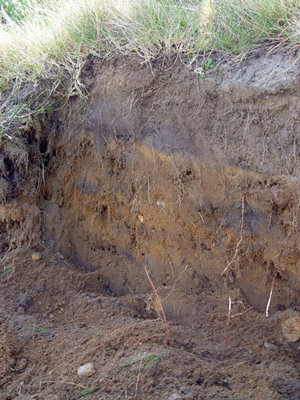 To the northeast of Altenwalde a slightly higher proportion of clay is found in the soil near the surface, which causes delayed subsoil seepage of water. After strong rainfall or after the snow melt the surface water stays here for days or even weeks. This caused the formation of pseudogley podzols.

Another feature in the north of the project area is the Holter Steertmoor, which forms the beginning of a fen stretching to the north. Despite its small size it significantly increases the biodiversity of the location. However, in the past it was adversely affected by the creation of ditches and other measures.