The “Hannoversche Moorgeest” project area encompasses 2.243 hectares and consists of Helstorfer Moor, Otternhagener Moor, Bissendorfer Moor and Schwarzes Moor. The names derive from their natural attribution to the Weser-Aller Plain and, within that area, to the “Hannoversche Moorgeest”. The four bogs lie in the Hanover region, spanning the community of Wedemark and the towns of Neustadt, Langenhagen and Garbsen. 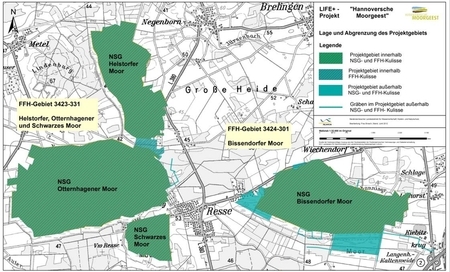 Location and boundaries of the “Hannoversche Moorgeest” LIFE+ Project area

The bogs have, in part, been nature reserves for decades and have been classified by the EU Commission as Fauna-Flora-Habitat (FFH) areas within the framework of the European “Natura 2000” network. This has made it possible to preserve about 93 percent of the project landscape and scenery and, in some cases, to already bring about a positive development. 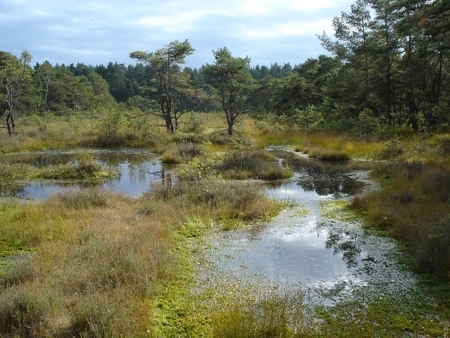 There are still remains of active raised bogs in the central marshland areas. There are also bog woodlands, transition mires and quaking bogs, depressions on peat substrates (Rhynchosporion), as well as large areas of raised bogs capable of renaturation to be found there. Rare species of flora special to this habitat such as peat moss (Sphagnum), sundew (Drosera), cotton grass (Eriophorum), fenberries (Vaccinium oxycoccus) and erica (Erica tetralix) grow in the near-natural stretches typical of marshland. 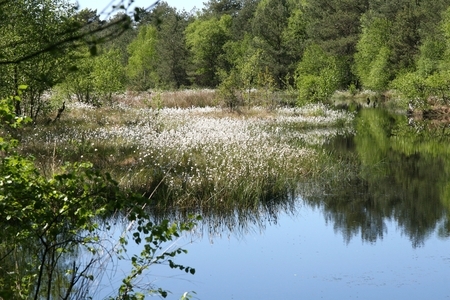 Cotton grass (Eriophorum) at a re-wetted former peat cutting site (picture taken by C. Stahl)
The crane (Grus grus) has become indigenous to this area over the past few years. The nightjar (Caprimulgus europaeus) is among the species that breed on the moors, and short-eared owls (Asio flammeus) and great grey shrikes (Lanius excubitor) spend the winter there.

Although there are valuable marshland habitats and species in 76 percent of the project area, they are, by European standards, often in a degraded state of conservation, the reason being the disruption of the natural hydrologic balance. Biotope structures indicate that more than 80 percent of the project area has been severely or substantially drained (see Illustration No. 11: Serious effects caused by drainage). The consequences are, invariably, increasing afforestation of the bogs, the displacement of typical marshland vegetation, and a rise in species not endemic to the area. 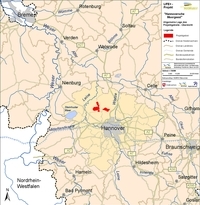