Various measures are required in the project area so as to upgrade the habitat types as specified in the FFH Directive, as well as other valuable biotope types. A distinction must be made in this regard between large-scale measures and smaller local measures requiring less effort. 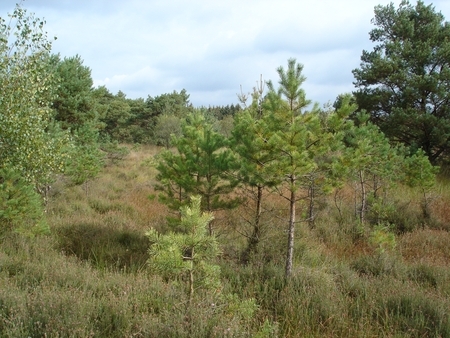 Young pine and birch trees in a heath area in which erica (Erica tetralix) is growing. Core areas in which undergrowth is spreading excessively will have to be cleared mechanically until re-wetting becomes effective (Helstorfer Moor). (Picture S. Brosch)

Cultivated blueberry (Vaccinium corymbosum) bush on the edge of a small wood – stemming from seed contained in bird droppings. Excessive growth should be removed, combined with the re-wetting of the bog. (Picture taken by S. Brosch)

Several blueberry plantations are located in the vicinity of the project area. The cultivated blueberries (Vaccinium corymbosum) frequently found in the project area stem from seed contained in bird droppings. Cultivated blueberries are fast-growing, are not indigenous to this area, and supplant the vegetation typical of raised bogs. They should be removed permanently, if possible, so that they are no longer able to spread.

Isolated old trees liven up the landscape aesthetically (Bissendorfer Moor). They are, on the other hand, seed producers and therefore undesirable. (Picture taken by S. Brosch)
.

On the fringes of the bogs within the project area there is intensively used arable land covering an area of around 11 hectares. The land is privately owned and to be purchased by the state of Lower Saxony. The plan is to convert it into mesophile grassland as soon as possible and to have it used extensively by local farmers. This will generally be done by seeding grassland and leasing it to local farmers, who will have to comply with specific conditions regarding use.

Development of extensive structurally rich grassland on the fringes

Privately-owned grassland, mainly on mineral-soil sites, is located on the fringes of the bogs in the project area. It is to be purchased, just like the arable land, by the state of Lower Saxony. This land is also to be extensified and, in the long run, developed into species-rich grassland communities including, in particular, lowland hay meadows (FFH habitat type 6510).

This will apply to some 65 hectares of grassland that at present is mostly poor in species and intensively cultivated. Sustained extensive use by local farmers is subsequently envisaged. This will generally be done on the basis of lease contracts containing specific conditions regarding use. Also, there are plans to optimise the cultivation and management of some 83 hectares of mesophile grassland as well as humid and wet grassland already owned by the public sector. A review will be conducted in this regard and, if necessary, adjustments made to meet the requirements of the management and development plan.