Helstorfer Moor is situated in the north of the “Hannoversche Moorgeest” peat bogs and covers some 415 hectares. It typically comprises a mosaic of low bogs, transition mire and raised bog vegetation. Numerous bodies of nutrient-poor stagnant water with well-developed water and river bank vegetation, and smaller bodies of water rich in humic substances and in some cases poor in nutrients at sites formerly used by farmers for manual peat extraction, give the area its character. 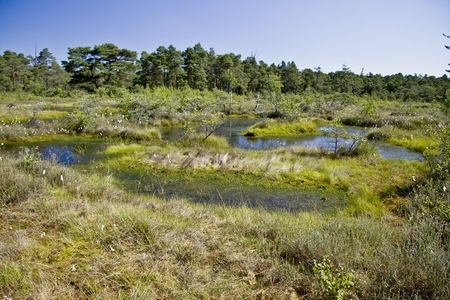 The area also comprises pine- and birch-dominated bog woodland as well as birch carr and moor heathland. The eastern fringes are characterised by species-poor grassland whose utilisation ranges from extensive to intensive.

This bog was placed under protection as a nature reserve in 1996 and forms part of the Helstorfer, Otternhagener and Schwarzes Moor FFH area.

Helstorfer Moor came about some 4,000 years ago. Sedge- (Carex) rich birch carr peat makes up the bottom-most layer, which has a thickness of around 20 to 40 cm. With the exception of the area’s western fringe with its low bogs peat extending as far as the surface, the birch carr peat is covered by a peat layer comprising peat moss (Sphagnum), sedge (Carex) and rannoch-rush (Scheuchzeria palustris) some 60 cm in thickness. On top of this there is a layer of sapric and fibric peat. The sapric peat is greatly decomposed and less than 1 metre (< 1 m) in thickness. The fibric peat, by comparison, is weakly decomposed and present in greater thicknesses, reaching even as much as 3.4 metres thickness at the centre of Helstorfer Moor.

There is a watershed in the middle of the moor. The area had been drained via diverse ditches in southerly direction, as well as via the “Negenborner Moorgraben” toward the east, via a ditch adjacent to the moor towards the “Neue Auter” brook in the west, and via the “Ochsenbeeke” to the “Jürsenbach” brook in the north. Besides the aim of cultivating the area for agricultural purposes, farmers used to extract peat manually for fuel.

Contrary to expectations, the drainage has hardly affected inner areas where former peat cutting sites are located. There the water level still extends as far as the surface, as is typical of a moor’s functioning hydrologic balance.

In the transition areas from raised bog to low bog, however, the drainage measures have had far-reaching adverse effects. The wet grasslands on the eastern side of the moor have extensively dried up and since been converted to arable land. The influence of cultivation is also evident in immigrant species, which are causing a shift in the fauna and flora typical of the moor.

In spite of the drainage, Helstorfer Moor continues to display a great abundance of typical vegetation and species. 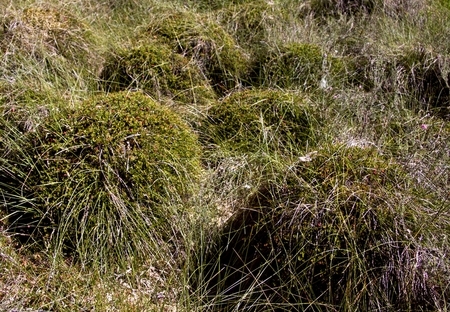 Extended peat moss/quaking bog communities have developed. Silted-up former peat-cutting sites contain groups of hummocks and bog hollows with flora typical of moorland areas, especially the entire variety of hummocky peat moss. And last but not least, the peat moss that has settled in many bodies of water reflects a raised bog that is alive and in a state of growth again. 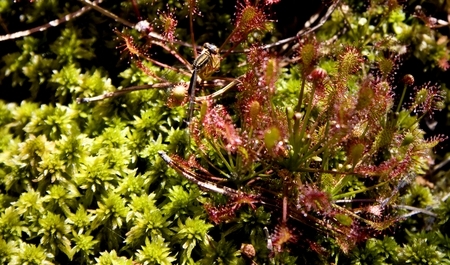 Worthy of special mention are occurrences of orchid species such as the bog orchid (Hammarbya paludosa), which has become a rarity on the North German Plain, and the equally rare lesser bladderwort (Utricularia minor), or the brown beak sedge (Rhynchospora fusca) at old aquiferous or silted-up peat cutting sites.

Cranes (Grus grus) have, for some years already, been using Helstorfer Moor as a breeding ground again and have extensive feeding habitats there. The rare common snipe (Gallinago gallinago), the nightjar (Caprimulgus europaeus) and the European stonechat (Saxicola rubicola) also breed there.