During the overall project, media-supported information events will be held at regular intervals for political decision-makers and planning authorities (local committees and members of parliament), local user groups and the local population. The first event of this kind was the opening event held in Resse on 14 September 2012. Such events will be conducted especially after the beginning and towards the end of the project, as well as prior to the beginning and following the completion of important construction measures. There will also be special information events and excursions to learn more about the area and its resources that are in need of protection. Various actors can also be addressed at an emotional level and won over for the project by means of excursions.

Additional events will take place within the scope of the land consolidation procedure. There were already two major information events in this context, on 30 June 2011 and 27 November 2012, both of which were attended by over 200 land owners. 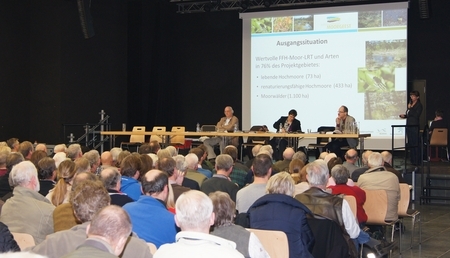 The Lower Saxony Ministry for the Environment, Energy and Climate Protection had extended invitations to the opening event, held on the Friday morning at the “Heidegasthof Löns” restaurant in Resse, for the renaturalisation of the “Hannoversche Moorgeest” peat bog area. The Minister for the Environment of Lower Saxony at the time, Dr. Stefan Birkner, presented the partners and the management of the EU LIFE Project to an audience of 120 persons.

Former Minister for the Environment Dr. Stefan Birkner, 1st Regional Councillor Prof. Dr. Axel Priebs, project manager Susanne Brosch (pictures taken by J. Fahning)
The minister stressed in his speech the importance of the bogs for Lower Saxony and reminded about the state’s special responsibility for protecting the raised bogs. He thanked all those who supported the project, as well as the citizens for their critical input. Professor Dr. Axel Priebs, 1st Regional Councillor and head of the Environmental Department (Hanover Region communal organisation), referred in his opening words to the historical development of the EU LIFE Project, which can be successful only with the support of the population and the local authorities. Mayor Tjark Bartels subsequently spoke on behalf of the communities in the project area and took the opportunity to point out the importance of the Moor Information Centre (MoorIZ) in Resse.

The question regarding “Why raised bog protection with LIFE+?” was addressed in detail by Dr. Heike Bockmann, head of the section responsible for nature conservation at the Lower Saxony Water Management, Coastal Defence and Nature Conservation Agency (NLWKN). Susanne Brosch (NLWKN project manager) then dealt specifically with the project objectives, the planned measures and the project partner, the Hanover Region communal organisation. Sonja Papenfuss, head of the Hanover Region communal organisation department in charge of environmental affairs, explained that Hanover Region communal organisation will seek the necessary approvals and implement management and development measures. Land consolidation was the topic that dominated the subsequent discussions with the citizens in attendance.

Questions regarding the project’s funding, arrangements on hunting on Otternhagener Moor and the problem of drainage were also discussed, however. All of the speakers had pointed out prior to this informative event that involvement of the population was particularly important to them.