Lower Saxony has the largest share of raised bogs within the Euro-Atlantic region but, as a result of drainage, peat cutting and cultivation, almost all of them have lost their original character. Lower Saxony bears a special responsibility for preserving these last, near-natural raised bogs. With financial assistance from the European Union (EU), it is taking on this responsibility under the LIFE+ Project approved in June 2012. The “Hannoversche Moorgeest” project, representing a total volume of EUR 11.4 million, is so far the second-largest nature conservation project from the LIFE+ programme being conducted by the EU in Germany. The EU will bear 75 per cent of the project costs, the state of Lower Saxony 20 %, and the Hanover Region communal organisation, in its capacity as a project partner, 5 percent.

This has been due mostly to the presence of valuable and, in some cases, priority FFH habitat types such as active raised bogs, depressions on peat substrates (Rhynchosporion) and bog woodland. The large white-faced darter (Leucorrhinia pectoralis), a type of dragonfly listed in Annex II of the FFH Directive, is also widespread there. Other endangered species, such as the short-eared owl (Asio flammeus), great grey shrike (Lanius excubitor), crane (Grus grus), nightjar (Caprimulgus europaeus), moor frog (Rana arvalis), or sundew (Drosera) and bog-rosemary (Andromeda rosmarinifolia), are also indigenous to the bogs. 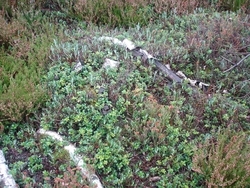 The project area encompasses 2,243 hectares. In the eleven years to come, its impaired hydrologic balance is to be regenerated. The Lower Saxony Water Management, Coastal Defence and Nature Conservation Agency (NLWKN) is managing the project and implementing the required measures on behalf of the Lower Saxony Ministry for the Environment, Energy and Climate Protection.

Re-wetting calls for drainage ditches to be filled in and special bank structures (ring walls) to be built from peat that will retain the rainwater in the moorland areas. The striven-for all-year-round elevation of the water level in the peat body is the most important prerequisite for the conservation, settlement and spread of fauna and flora species typical of raised bogs.

A land consolidation procedure is being carried out by the Lower Saxony Geographic Information and Spatial Development Office (LGLN) with the aim of acquiring a large share of the area, so as to avoid placing proprietors and farmers at an economic disadvantage.

The project also serves to protect the climate, as the wetting of the peat body will prevent the emanation of climate-damaging CO2 gas.